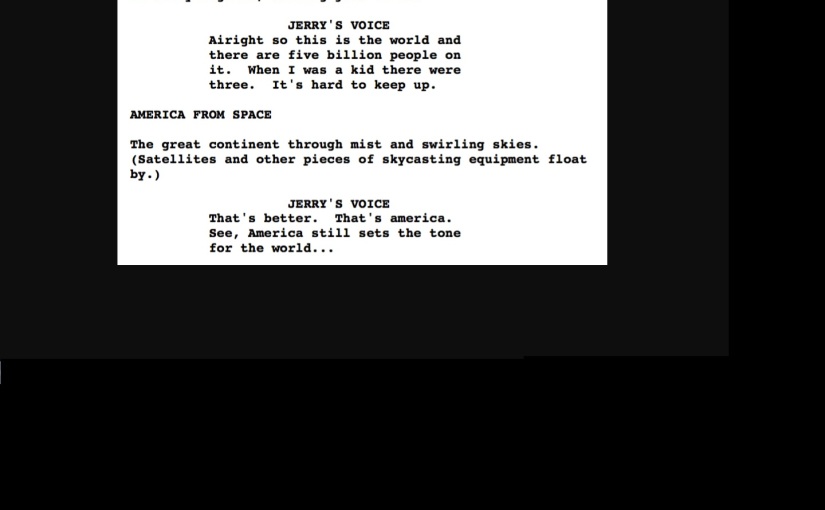 Had a recent phone conversation with a local independent film producer I know, and it involved his anecdote about a writer he had met who wanted him to produce a film he had written but not to direct it.  The writer, despite having no directing credits, intended to direct.  “So,” my friend told this guy, “You want me to do the work of producing while you jerk off directing?”  I didn’t comment on that characterization and I think I only suggested maybe the writer should make some shorts and become confident about his directing and maybe put people at ease with samples of work.

What I didn’t think to say until after he conversation had wrapped was that  I can identify with the writer.  I also only want a producer to produce.  The right person should be in the right position.  Someone business oriented and who is a born producer is ideal to produce.  If that person gets the money and resources together, often times that person will install himself/herself as director whether or not there is a knack for the psychology of the frame and the displacement impact of a cut or the progression of shots in a sequence.  The craft of movie directing is under constant attack from the “coverage” sensibility that makes recording of a scene something rote and generic.

A producer with more contacts than the writer can also get away with using that leverage for arbitrary changes.  Too often what the “buyer” of a script (which may as well just be called the receiver in low budget filmmaking, where the value of a script might be more than the total budget of the film so there is no chance of getting that figure) might only want to see that the heavy lifting is there in terms of story and continuity.  But as much work as a writer puts into that, much of it is about adhering to formats of storytelling that are long established. The dialogue might be where the writer’s voice or style comes in, and filmmakers as well as actors might often feel free to trade out the written word for a paraphrasing or eliminate it all together.

If that happens, the originally intended writer-director has dropped a notch to screenwriter without getting a huge pay out and will not see the writing brought to life because now it is changed often arbitrarily and if enough has been changed (on whomever’s whim) the credit itself may now be shared with someone else.  The dangers would be greater if the screenwriter came onto a project embellishing someone else’s initial blurb or TV Guide summary.  A year can be spent contributing to fleshing out someone else’s idea, and in the end someone else gets credit and someone else gets paid.

If you have a fear about story ideas being stolen, the cold comfort you will get from far too many low budget directors and more experienced filmmakers is, “Well there are no original ideas.”  This is another reason to guard your dialogue and other quirks that make the script uniquely your own.  A filmmaker might look at a script as something that should just lay out the foundations and it should be straight line so that the performances and presentation can be the fun or wavy-line element.  This is the same principle of casting improvisation actors or live comedy actors who want to deviate and embellish rather than learn and rehearse dialogue, but even a comedy needs a grounded foundation and a sea level from most performers so the unusual element can stand out.

A writer can spend more time than anyone on a project and require the most personal connection and stamina to really bring something to it.  But as long as it is a buyer’s market, the most appropriate fit for the script might not be found.  The director should be the right fit, as should the casting.  If the wrong person makes an offer, and a desperate writer accepts it, the script will no longer be interpreted but instead it will be imposed upon and made to conform something that is not built into it.  An inexperienced writer with the right crew can realistically direct a movie as well as – if not better than – someone experienced who might have had a rote or “coverage” approach.  Not that I want to take the off-ramp to a tedious argument about what coverage is and how common it is.  (Wide establishing shot, close-ups of each character, “overs” or “dirty”  over-shoulder of each, maybe a cut-away shot, the goal being for the producer and editors to shape the scene according to their own whim and to not be limited by what the director wanted to emphasize.)

My own writing is typically “wavy line.”  That dictates a more subdued performance. And I might have something to offend everybody i one of my scripts, so if I work with someone who wants to play it safe the result will be luke warm and pointless.  Others might not have that purist sensibility.  And it might not apply to every script.  But people usually respect something to the extent that they paid for it.  If a writer is a pushover, differing to everybody else’s opinion, maybe their script didn’t stand for anything in the first place.  In  my case, I just want my gut impulses to be vindicated and I will not be vindicated if my decisions and my dialogue are traded out.  If a choice is six of one, half dozen of the other, then I want my own six to see the light of day and have its day in court.  Once I have a screenplay the way I want it, I now consider how to novelize it.  This doesn’t get the control issues out of my system.  It is just to flesh things out and serve notice that there is a version that can be enjoyed on its own. Screenwriting can be excellent but it is so common a challenge to take on that it gets little respect.  A stage play or a novel is given more credence.

A screenplay is really only worth writing to make money or to direct it.  You have to screen people, friends or strangers alike, to make sure they don’t need to piss in the soup.  If they don’t like your writing then you don’t have a leg to stand on with them other than floating the idea that you are savvy enough that simply stealing an idea can get their own variation slapped with a restraining order and their own reputation with investors destroyed.  You may record a table reading of your script, but KEEP THE DIRECTIONS, even if dialogue ends up taking over a reading.  Make sure it is not a cold reading , because it DOESN’T MATTER if the actors are bored.  They should not have phones out texting or answering messages while waiting for a line and then letting the rhythm die because of a pause as cures are missed.  They have to comb through the script for speed bumps and identify them so what you record and what listeners experience is a decent and lively presentation of the script, not a lot of stumbling over lines that give the impression there was something wrong with the words. A good actor can dance trippingly through mediocre words and a personality can come across that makes the whole seem of a piece.